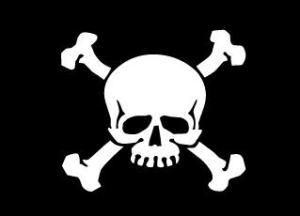 I’ve often wondered why I’m such a pirate fan because, truth be told, I’m really not very pirate-like at all. I feel bad if I think I’ve hurt someone’s feelings, I don’t go a’plundering or a’raping and I hardly even ever get my feet wet.

Ok, ok, so my love probably has something to do with the flag to be honest, that and a liking for rum. But in a bid to feel better about the skull pencil toppers and skull and crossbones flag on my computer, I’ve been trying to hit on a way to incorporate pirateness into my ethos without being… well, particularly piratey.

So guess what? I applied pirate sterotypes to story writing. Now I can sail the seven seas of my imagination and spend untold years on the way they steal from reality. Occasionally I may double-cross a few fellow sailors, steal someone’s treasured memories or drift into dangerous water – but it will be ok, because I won’t just be a dick, I’ll be a literary pirate – and everyone loves pirates right?

What’s more, I’ll get to have a map to the gold (satisfaction of good work gold if not actually bestseller type gold!). I can’t lose. Right?

8 thoughts on “Pirates! And a tortured writing metaphor”

Read Beyond the Body at Ellipsis zine