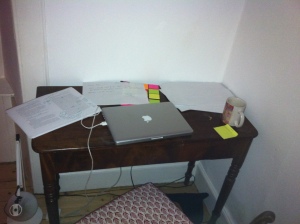 You know what I did the other week? I went on holiday on my own or the very first time. Well, I say holiday, but really I mean ‘time spent writing, reading or having a second bath of the day telling myself I should be writing’. It was lovely.

It’s one of those things I’ve always wanted to do but always been too scared to. What if you pay stupid money for a week to yourself and write NOTHING? See, scary biscuits. But hey, if now isn’t the time to try out stuff like that (what with the freelancing and all) I don’t know when is.

Turns out, I did do a bunch of writing, but I think it helped that I spent the time working on something that was already quite substantial. Having to come up with new stuff out of the blue in a relatively short space of time might have been a bit daunting.

For that, I think I’d prefer a communal environment, rather rattling round on my own for a week (how happy am I that I stayed sane despite only having one conversation for the whole time I was away?). So next on the list? Arvon I reckon, anyone been on one? Did you love it?

8 thoughts on “Writing thing that wasn’t exactly a holiday”