There’s been some downtime in my writing world recently, partly due to work and life commitments and partly because I’ve been letting a story stew awhile. Now the time has come for me to get back into it and I’m very glad about it.

Not writing seems to mean that I have too much time to become introspective, and not in a good way. Writing, on the other hand, allows me to be pretty damn self indulgent but in a constructive (ha) way. It lets me bleat on and on about the things that are important to me, but it forces me to make the telling entertaining. I feel sorry for my real life friends who tend to get the unedited – and very vocal – versions.

This has all been making me think about that old chestnut, how much of what a writer writes is actually the writers’ self oozing out on the page?

I haven’t got an answer, but I reckon all my stories are made up of the dust, blood and hair my body can survive without.

It can be easy to bury yourself deep in the fiction though, even make it near impossible for the reader to really appreciate what essence of you is hidden away in it’s core. And with that thought in mind, I thought I’d chuck in an unfinished self portrait. 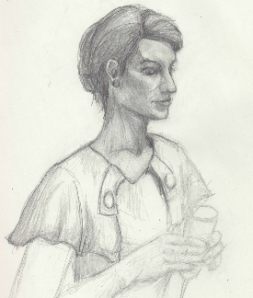 This doesn’t look much like me at all, it’s more like me trying to make myself look more attractive and being let down by my drawing skills.

Maybe the same thing can be said for my stories: they are meant to show the me I’d like to be, but the really show my clumsiness and inability to transcend everything that makes me, me.

Soooo, I’ve done 57 out of the 70 pieces of freelance work I agreed to do between the 8th and 26th of this month. Did I say I’d do these because I had a holiday from my 9-5.30 job? Nope. Did I agree to these because there was nothing else major going on in my life, such as moving flat? Nope. Did I say ‘hell yeah’ because I wasn’t doing any creative writing anyway? Nope.

So why exactly did I say yes? Because I’m greedy for the money I’m afraid. But come Monday night it’ll be done and I can stop constantly writing tripe I’m getting paid for and get back to spending the evenings and mornings writing slightly more artful tripe I only very occasionally get paid for 😛

On the bright side, I argued successfully that I should be considered for a wee promotion at work and got some nice writing news this week – so maybe working like a slave really does pay off. Maybe.

The more time I devote to writing, the more I feel as though my life is in danger of becoming overly repetitive. I suppose I don’t really want ALL of my excitement and drama playing out on the pages in front of me, inspiration would eventually run dry that way I’m sure, but it’s pretty hard to get the balance right.

At the moment, days go: get up, write or edit, go to work for four hours and write and get annoyed by people, have an hour break for lunch to write or edit, back to work for another 3.5 hours with generally more annoyance than writing, home for tea, try to write and read then fall asleep. This is repeated for most week days with very occasional fun nights thrown in. There ain’t much in the way of variation there, especially when you’ve been working on the same novel for over a year…

When I was younger, the idea of days full of the same thing was terrifying, I honestly couldn’t think of anything worse, but the older I get the more attracted I become to routine (crazy old cat lady without the cats here I come). But too much of a routine could be a bad, bad thing.

If I’m not paying attention at work, I can churn out clichés at a rate of knots – that’s what happens when you do the same damn thing all the time – I have to make sure that same thing doesn’t happen to my fiction, even if it means taking a little bit of time away from writing it occasionally. Does anyone have a good way of shaking up their routine without compromising it completely?